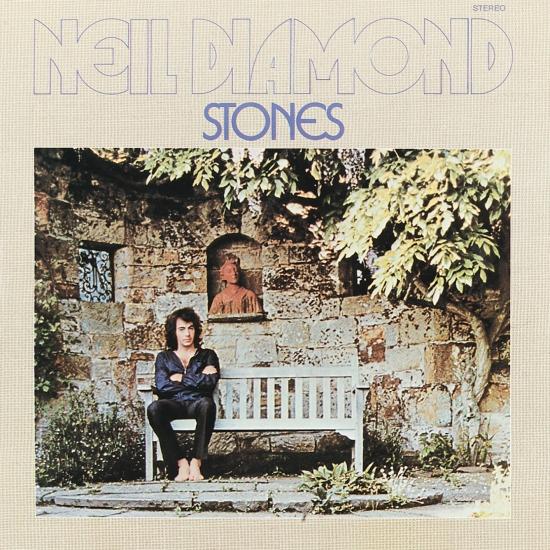 Something of an anomaly in the Neil Diamond catalog, „Stones“ features half-a-dozen covers of songs by Diamond's contemporaries, including Randy Newman, Roger Miller, and Joni Mitchell. Stones songs Diamond's version of Miller's "Husbands and Wives" is a tasteful masterpiece of country pastiche, and his version of Jacques Brel's "If You Go Away" is similarly restrained. The album's title track is a fine example of early-'70s L.A. pastoral pop, while the ache of homesickness in his existential classic hit "I Am... I Said" ('and no-one heard at all, not even the chair... ") continues to resonate.
„Driven by the hit singles "I Am...I Said" and "Crunchy Granola Suite," Stones is a stronger album than most of Neil Diamond's late-'60s records. Instead of padding the album with mediocre originals, Diamond picked several fine covers to fill out the remainder of the album, including Roger Miller's "Husbands and Wives," Joni Mitchell's "Chelsea Morning," Leonard Cohen's "Suzanne," Randy Newman's "I Think It's Gonna Rain," Jacques Brel's "If You Go Away," and Tom Paxton's "The Last Thing on My Mind." There are still a few weak patches on Stones, but the record remains an engaging collection of mainstream pop.“ (Stephen Thomas Erlewine, AMG)
Produced by Tom Catalano
Digitally remastered