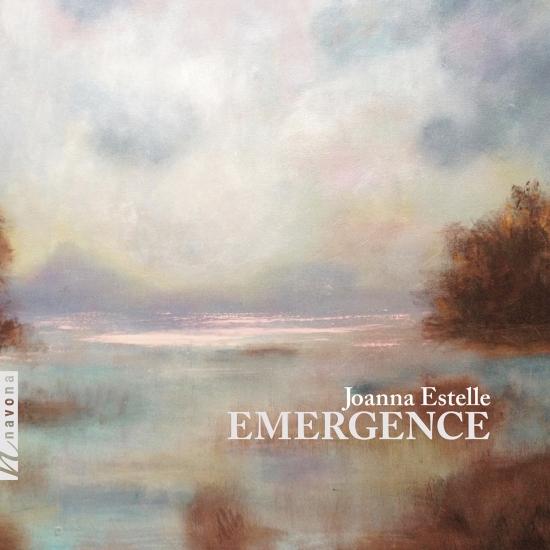 Composer/arranger/lyricist Joanna Estelle presents EMERGENCE: a compilation of works produced under her personal philosophy that “quality music uplifts humankind.” The album includes a generous list of collaborators: John Gordon Armstrong (arranger), Laurence Ewashko (baritone), Morgan Strickland, Susan Elizabeth Brown and Laura Dziubaniuk (soprano), Brandon Wilkie and Roland Gjernes (cello), Frédéric Lacroix (piano), and two choral ensembles, Ewashko Singers and Capital Chamber Choir.
The opening work is “Umori” [Moods], ten character pieces for piano soloist, musical superlatives describing ten familiar dispositions of the human condition: Ardent, Determined, Energetic, Whimsical, Shimmery, Repentant, Reflective, Wistful, Solemn, and Hopeful. Compositionally, the overarching style is one of charismatic sentiment, accented by the bright timbre of Lacroix’s piano. The work is altogether lovely and a wonderful introduction to “Susannah’s Lullaby (This is a Face of Love),” and “Language of a Rose,” the first two art songs included on the album.
“Moyi mamij” [For My Mother] is an exquisite quartet that brings a tear to the eye of anyone who has ever felt a mother’s love. In that sentiment, let’s hope that Princes William and Harry will have the opportunity to hear Estelle’s “Qu’est-ce que c’est la vie? [What is life?]" an extraordinary hommage to “The People’s Princess,” for which Estelle wrote not only the music, but the French text. In “Abwoon d’bwashmaya” [Aramaic Lord’s Prayer], Estelle’s writing is reverent and prayerful -- blending perfectly the melodic sonorities of the soprano voice and the cello.
Estelle showcases her choral writing with the inclusion of four works: “Water Canticle (For Margaret Trudeau),” “La chanson de ton coeur” [The Song of Your Heart], “Child of the Manger,” and “Song for Abwoon.” Estelle, who once put music aside to appease her parents by studying psychology and accounting instead, is now a well respected composer in Canada. She relates, “When you see people around the world are listening to and loving your songs, you know composing is something you should take seriously.”
Frédéric Lacroix, piano
Morgan Strickland, soprano
Brandon Wilkie, cello
Laura Dziubaniuk, soprano
Laurence Ewashko, baritone
Susan Elizabeth Brown, soprano
Roland Gjernes, cello
Robert Ryan, tenor solo
Aude Urbancic, piano
Sonya Sweeney, piano
Ewashko Singers
Capital Chamber Choir 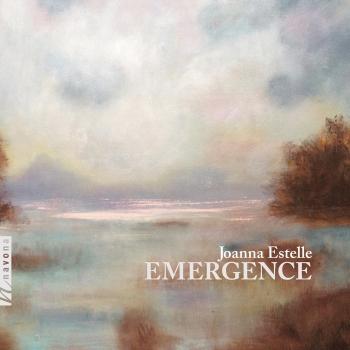 Joanna Estelle (Storoschuk)
is a Canadian composer, lyricist, and arranger whose music has been performed from Parliament Hill, Ottawa to London (UK), Barcelona (Spain), and elsewhere around the world. She graduated summa cum laude on the Dean’s list as the University of Ottawa’s Faculty of Arts silver medalist (2009). Joanna then completed the MA Music Programme at York University, Toronto (2009-2011) and became a Melodious Accord Fellow of the American choral composer Alice Parker. Since 2016, she has been a doctoral candidate in composition through the University of Sheffield (UK). Joanna served on the board of the Association of Canadian Women Composers (ACWC) for many years and was a founding member of the Ottawa New Music Creators (2008). Her CD "Emergence" released by PARMA Recordings (Boston) in April 2018 features Child of the Manger and Water Canticle which are both available from Cypress Choral Music.
Susan Elizabeth Brown
Kingston, Ontario Soprano Susan Elizabeth Brown has performed across Canada and internationally at the Royal Glasgow Concert Hall and the Waterfront Hall in Belfast, Northern Ireland. A graduate of St. Lawrence College's Musical Theatre Program, she is now based in Ottawa. Her voice has been described as “a remarkably pretty instrument, pure, ‘spinny’ with beautiful extension and a timbre that cuts through an ensemble without shrillness.” Her dramatic characterizations reverberate with an intensity which convey “the depths of pathos and bitter-sweetness of first love”. Susan has established herself as a strong presence on the opera stage. Her recent performance of Donna Anna in Don Giovanni with Jeunesses Musicales was said to have "formidable impact." Her other operatic roles including Mimi in La Boheme, Adina in Elisir D'amore, and Gilda in Rigoletto were noted for their exquisiteness of tone and sensitivity of interpretation. A powerful and empathetic communicator, with stunning and effortless high notes, her oratorio and concert work has included the World Premiere of Clarence Lucas’ Dies Irae (Cantata Singers of Ottawa) in June 2017, and the Ottawa Choral Society/17 Voyces co-production of Carmina Burana set to silent film Ben-Hur, alongside internationally-acclaimed countertenor Daniel Taylor.
Laura Dziubaniuk
has been an active performer, music educator/director and choral conductor since 1989. Opera, oratorio, concert and chamber music performances have taken her through North America, Europe and the Middle East. Ms. Dziubaniuk holds a Bachelor of Music Degree in Vocal Performance/Education from the University of Ottawa (CA) and a Bachelor of Education Degree in Primary/Junior from Nipissing University (CA). She was a laureate in numerous International Vocal Scholarships and Canadian Vocal Music Competitions which had enabled her to further her music studies at the Kiev Conservatory in Kiev, Ukraine; the Sixth International Interpretation Courses in Piestany, Slovakia; and the European Mozart Academy in Krakow and Kraskow, Poland.
Laurence Ewashko
Former conductor of the Vienna Boys’ Choir, Laurence Ewashko has made a significant contribution to the quality and appreciation of vocal music in Canada and abroad as a choral clinician, vocal coach and adjudicator for more than three decades. Laurence has prepared choruses for many prestigious conductors, including Sir Colin Davis, Trevor Pinnock, Mario Bernardi, Gabriel Chmura, Jane Glover, Jack Everly, Pinchas Zukerman and Alexander Shelley. He regularly prepares choruses for performances at Canada’s National Arts Centre in Ottawa. Recent highlights include his work as chorus master for two exciting projects involving Canadian composers and the NAC Orchestra: a live recording of Ana Sokolović's Golden Slumbers Kiss Your Eyes and, as part of Canada 150 celebrations, the revival of Harry Somers' opera Louis Riel. Currently Associate Professor of Choral Studies at the University of Ottawa, Laurence conducts the School of Music’s two choirs. He has been chorus master and vocal coach for the Banff Centre for the Arts summer programmes and was the music director of the Cantata Singers for 17 years. He is artistic director of the Ewashko Singers, a choral group which he founded. He also conducted Opera Lyra Ottawa’s chorus from 1988 to 2015. Laurence is a recipient of the prestigious Leslie Bell Prize for Choral Conducting.