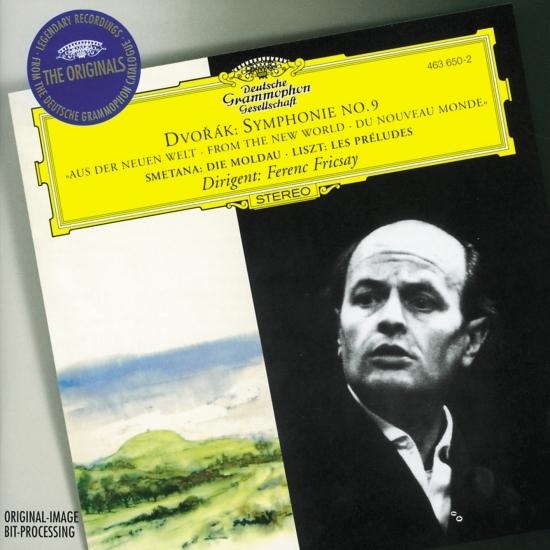 A classic! Fricsay's 'New World' remains one of the most passionate and spontaneous available. Its noteworthy features include a really dramatic opening movement, a gorgeously sung Largo, a sharply rhythmic scherzo, and a grandly imposing finale sporting a couple of hugely exciting climaxes. Like few others, Fricsay had the secret of communicating a very wide-ranging flexibility of tempo without compromising rhythmic security or the long melodic line. You can hear this very clearly in the symphony's first movement, from the second subject on through the development and up to the recapitulation. This performance hasn't dated a bit, either interpretively or sonically, and there have been quite a few competitors since.
The couplings, a swiftly flowing Moldau and a spectacularly virile and cogent Les Préludes, have held up equally well. Few stereo recordings emanated from the baton of this genuine giant of the podium, and that makes what little we have all the more precious. I truly hope that DG gives 'originals' treatment to his remaining Beethoven symphony recordings, and also to his stereo Tchaikovsky Sixth Symphony. They should be permanent fixtures in the catalog. Until then, enjoy this marvelous taste of Fricsay's immortal art. (David Hurwitz, ClassicsToday.com)
Berlin Philharmonic Orchestra
Berlin Radio Symphony Orchestra
Ferenc Fricsay, Conductor