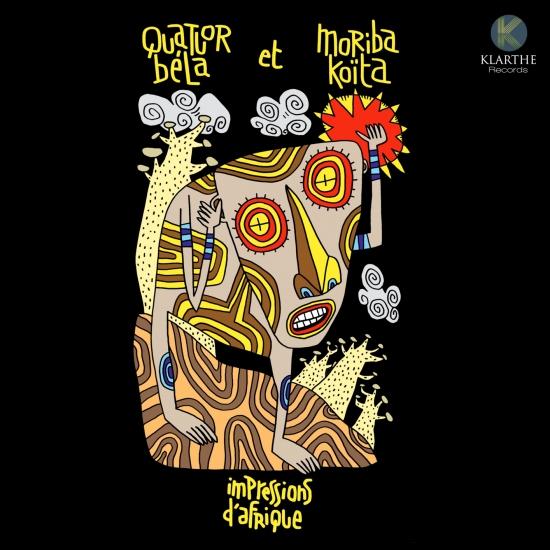 This album is the fruit of our fascination for African music. The pieces recorded here are the result of a journey lasting a number of years. For us, musicians of a string quartet, Africa appears as a continent far removed from the artistic traditions of our lands. And yet...
In the beginning, there was the allure of the cora, the polyphonic pygmy songs, the ethiopian bolel... and hours of spent devouring the wonderful recordings from the Ocora label.
Next came the discovery of the composer Kevin Volans' singular universe, an improbable and wonderful bridge between the Zulu and occidental avant-garde culture. A more transposed and stylized vision of the African continent opened itself up to us. We must thank the intrepid Kronos Quartet who were the first to record the fantastic White Man Sleeps.
It was during our recording of Ligeti's quartets that we met Simha Arom, the great ethnomusicologist and specialist in the music of the Aka pygmies. His erudition and incredible memories of his expeditions in the Central African Republic encouraged us to explore ourselves the musical riches of this huge continent.
In between times, I had written Impressions of Africa, after a commission by Luc Dedreuil for the 'Alexander' cello quartet, of which we play here the version for string quartet. The sonorous images created in this piece are 'veritably' phantasmagoric, both caricatures of stereotypes that we might have of the Dark continent, and intangible dreams of an african garden of Eden. Michel Leiris, in his book The African Ghost, describes as much what he sees as what he feels or indeed how he is transformed by his travels. In the same way Impressions of Africa, is this 'corner of africa' which is part of our communal imagination, a world which, for my part, even a number of stays in Gabon or in the Congo have not totally erased.
And last but not least, there was the encounter with Moriba. When Philippe Conrath, director of Africolor festival, asked us to share the stage with an african musician, it was our dear Charlotte De Jésus, manager of the quartet, who immediately thought of Moriba Koïta, and who introduced us. We were in direct contact with Mali and the tradition of griots. Before realising the true measure of the memory-man Moriba was, we were principally impressed by his instrumental virtuosity. The musical language, the manners of composing, or working, of 'approaching', were so different, the gap between musical notation and memorization of melodic formulas was immense, that the goal of playing our music together sometimes seemed unattainable. But the vehement desire to share a real musical object that belonged only to us five, won through. And it is maybe because we had to travel such long roads towards each other, that we developed such a particular relationship with Moriba, of great esteem and friendship, a relationship which belonged to us only.
On the 22nd of September 2016, the anniversary of the independence of Mali, Moriba Koïta died. He was, without a doubt, one of the greatest cultural ambassadors for Mali across the world. This album is dedicated to him.
Quatuor Béla
Moriba Koïta, n'gonis, tama 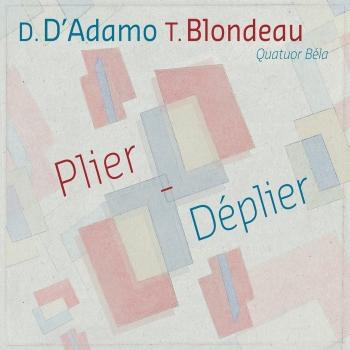 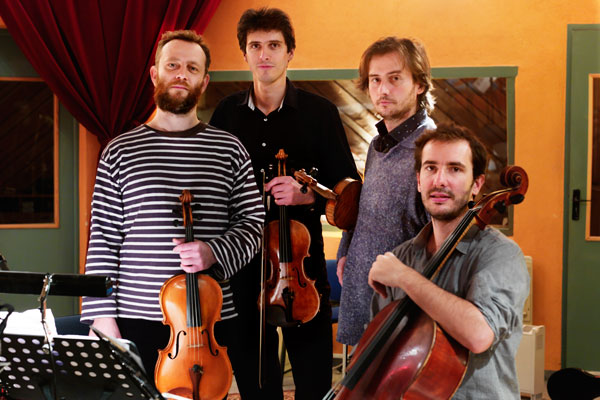 Quatuor Béla
Music of Today. Nothing more natural than wanting to play the music of one’s time… Yes, certainly and yet…
The path we have chosen for ourselves is one that hasn’t been traced in advance. The use of a repertoire in perpetual transformation – which questions our cultural reference points with each work – gives us the opportunity for constant inquiry. The four of us having graduated from the Conservatoires of Paris and Lyon, and trained in the now ancient discipline of the String Quartet, it is up to us to make our group of musicians thrive with the same boldness and intensity of those of the past. Surely this has been, for the last two and half centuries, the crucible from which composers have drawn their most experimental and intimate work.
Now, in the spirit of today’s artists, we would like to enrich our work with the influences of other types of music : electro-acoustic, improvisational, current and traditional. Our goal is to rethink stage space, the locations and structuring of concerts, as well as the relationship to the audience. We seek, through artistic encounters, not to stick to our strings, but to gather around us all the sensibilities that make contemporary art diverse. We are passionate about closing the long-standing gap between tradition and modernity.
Founded in 2006, the Quatuor Béla is composed of four young musicians from Lyon, graduates of the Conservatoire (CNSM) : Julien Dieudegard, Frédéric Aurier, Julian Boutin, and Luc Dedreuil.
They were united by their desire both to champion the contemporary repertoire (Ligeti, Crumb, Scelsi, Cage, Saariaho…) and to support all forms of musical creation : mixed media music, improvisation, musical theatre, and commissioned works.
They have performed in notable venues of today’s music scene, including the Musiques En Scène Biennale, Les Musiques Festival in Marseille, the Why Note Festival, the GRAME, Musique Action, and the GMEA, Arsenal de Metz.
Their innate desire for artistic exchange has brought them to work with artists of often disparate horizons : Jean François Vrod, Albert Marcoeur, Anne Bitran, Fantazio, Moriba Koïta. These collaborations have given birth to stage shows, an album, concerts, and projects, including Retour sur le Coissard Balbutant, Travaux Pratiques, Machina Mémorialis, and Impressions d’Afrique.
Convinced that scholarly contemporary expression deserves to play a vital and even unifying role in all music that is alive and new, they participate in events which are deliberately hybrids – at times acting as organizers, along with such companions of the road as Denis Charolles, Fantazio, and Sylvain Lemêtre, in which each performer aims to foster a modern, sincere and sensitive relationship with its audience : La Belle Ouie Festival, Carte Blanche to Fantazio in Calais, les Nuits d’Eté, Festival, La France qui se lève tôt, Carte Blanche to Quatuor Béla in Chambery, Musiques de Rues, Africolor)