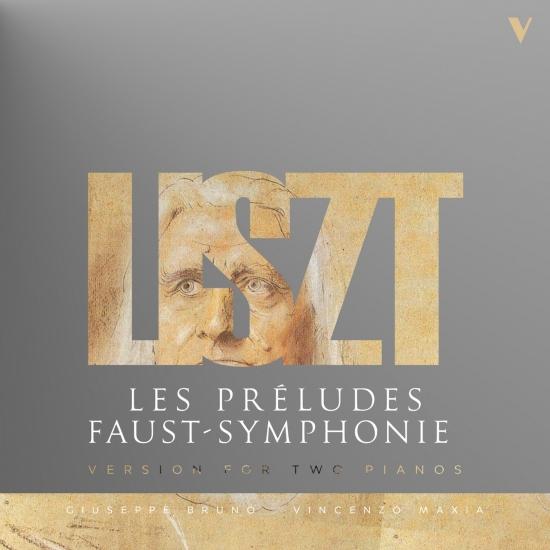 Possibly the first example of symphonic poem, “Les préludes” (1854) originated from an earlier setting of four poems by Joseph Autran from mixed chorus and piano, completed in 1845. Three years later, Liszt’s new interest in orchestration compelled him to elaborate the four movements into an orchestral overture, which he titled “Les Quatre Eléments” – The Four Elements. During his revision of the work three years later, he came across a poem by Alphonse de Lamartine, “Les preludes,” from the collection “Nouvelles méditations poétiques.” Liszt was taken by it, and chose it as the new title for the orchestral work, which was premiered in 1854 under his own direction. Several versions for piano appeared over the following years, including those of Karl Klauser and Eugene d’Albert. Liszt’s own splendid transcription for two pianos was published in 1856.
The Faust Symphony, whose full title is “Eine Faust-Symphonie in drei Charakterbildern” (A Faust Symphony in three character pictures) drew inspiration from Johann Wolfgang von Goethe’s eponymous drama “Faust.” The idea of writing an orchestral work on that subject occurred to Liszt some twenty years earlier, but it wasn’t until 1852 that he was compelled to give it serious thought. The work was completed in 1857, and was premiered that same year under Liszt’s baton during the inauguration of the Goether-Schiller monument in Weimar. The three movements focus on individual portrayals of the three main characters (Faust, Gretchen, and Mephistopheles), rather than unfolding as a narration based on Goethe’s work. Liszt’s own transcription for two pianos dates from the same period, but was not published until 1862.
The present recording features the two works in the interpretation of Italian pianists Giuseppe Bruno and Vincenzo Maxia, who have worked as a piano duo for nearly a decade. Their repertoire centers on the works by Liszt, Stravinsky, Ravel, and 20th-century composers. They have appeared internationally, most notably at the Chicago Duo Piano Festival. Alessandro Simonetto was the producer of the recording, which was captured by two vintage Brüel and Kiær microphones placed between his two Steinway D pianos.
Giuseppe Bruno, piano
Vincenzo Maxia, piano 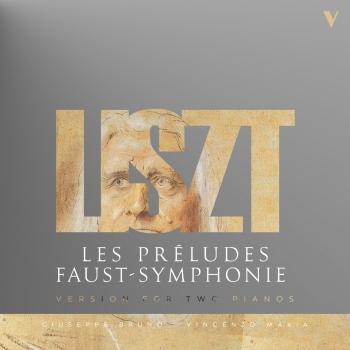 Giuseppe Bruno
graduated with honours in Piano, Composition and Conductorship with Professors Specchi, Zangelmi and Taverna. Maestro Bruno specialized in piano with Paolo Bordoni and in conductorship with Leopold Hager. He has attended a seminar in composition at the IRCAM in Paris.
Performing for several years as a pianist in many different chamber ensembles as well as a brilliant soloist. He has played with many important orchestras in Italy, USA, Greece, Romania and Germany in a repertory that goes from Mozart to Dallapiccola. From 1987 to 1992 he participated in the “Due Mondi” festival in Spoleto Italy and in 1988 in the Charleston festival in the USA.
In 1991 Maestro Bruno received an award at the International Piano Contest in Rome and in 1992 he received a second award in a duo with violin player Alberto Bologni at the “Viotti” in Vercelli, Italy. He recorded for Nuova Fonit Cetra, Diapason, SAM, Bongiovanni, Ars publica, Ars Musici, as well as for RAI, Swiss French and Italian radio and for WDR in Koeln. He collaborated with directors including Alkis Baltas, Spiros Argiris, Franz Lamprecht, Corneliu Dumbraveanu, violin player Sashko Gawriloff, singers Gail Gilmore and Victor von Halem, and with the Octet of Berlin Philharmonic. He is currently a member of the “Trio Petrarca”. In the past few years he has been acknowledged as a highly regarded conductor in Italy and abroad. Maestro Bruno is at present the Director of the "Giacomo Puccini" Conservatory, in La Spezia, Italy.