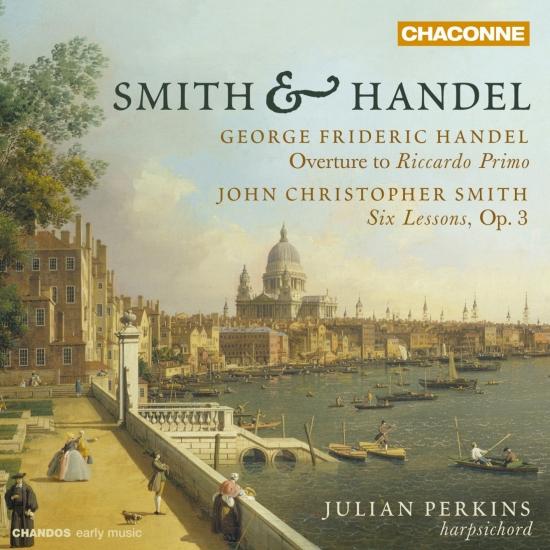 The internationally acclaimed harpsichordist and early classical music specialist Julian Perkins here presents the premiere recording of six Suites for harpsichord by Handel’s assistant, John Christopher Smith. The new release on Chaconne also features an arrangement by Handel of the overture to his opera Riccardo Primo.
Music assistants often have a poor press. Franz Süssmayr is known only for his controversial completion of Mozart’s Requiem, while Robert Craft is known largely for his role as Stravinsky’s assistant. As Handel’s amanuensis, John Christopher Smith has suffered a similar fate. Moreover, confusion has prevailed as to his identity. His father shared the same Christian names and was Handel’s original amanuensis. Thus the omens for Smith’s musical legacy were poor from the start. This project seeks to reappraise Smith the composer, whose prolific music bubbles over with brilliance, wit, and charm – not to mention an irresistible penchant for trills!
As a man of the theatre, Smith cultivated a style that evinces a comic interplay between the baroque and rococo; in his pieces, athletic hand crossings, unpredictable figurations, sudden shifts from major to minor keys, and sequences built over repeated left-hand chords vie with one another to create music that is both technically demanding and theatrical.
"... Julian Perkins deserves praise for his initiative in bringing this music to our attention and so do those who have supported him financially and otherwise. Productions like this make much sense as they broaden our musical horizon and fill in the blank spots on the musical map. Many music-lovers will have heard the name John Christopher Smith but never any of his music. Rather than going by what is written by scholars they should listen for themselves in order to assess the quality of Smith’s music. I have greatly enjoyed these suites. Yes, the influence of others is indisputable but they don’t result in epigonism. Smith’s suites have a character of their own. Perkins is a fine interpreter who brings out the qualities of these suites with great eloquence. He uses two beautiful harpsichords, copies of a French and an English instrument respectively. I found the English instrument especially interesting as this is a type of harpsichord one doesn’t hear that often..." (Johan van Veen, MusicWeb-International)
“… His [Smith’s] music occupies a strange sort of halfway territory between the late Baroque style and the progressive early Classical mould, and Julian Perkins captures the dichotomy of mid-18th-century England’s Scarlattian obsession and the emerging rococo style in his judicious playing of Smith’s Six Suites of Lessons for the Harpsichord, Op 3 … These playful lessons amply repay Perkins curiosity.” (David Vickers, Gramophone Magazine)
"... this is a highly entertaining album of mid-18th-century harpsichord music that aims to entertain and amuse rather than evaluate. and succeeds eminately in its goals. Recommended." (Barry Brenesal, Fanfare)
Julian Perkins, harpsichord 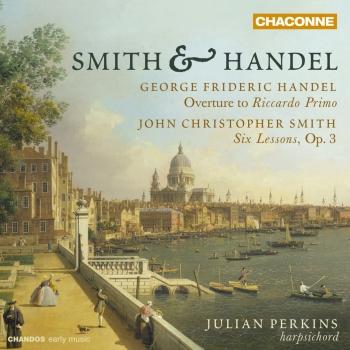 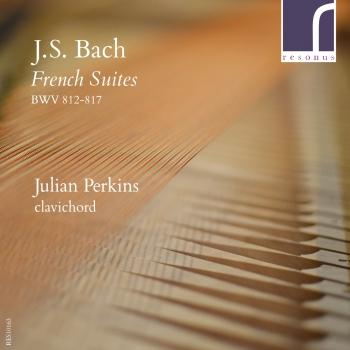 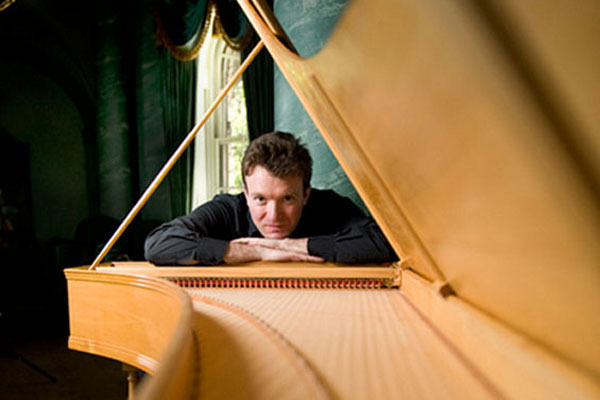 Julian Perkins
Described by the Sunday Times as ‘exuberantly stylish’, Julian Perkins enjoys a demanding career as a conductor and keyboard player. He is Founder-Director of Sounds Baroque and designate Artistic Director of Cambridge Handel Opera.
As a conductor, Julian has performed staged opera productions for organisations such as the Buxton Festival, Dutch National Opera Academy, Grimeborn Festival, Guildhall School of Music & Drama, Kings Place, New Chamber Opera and New Kent Opera, and concert performances with, among others, the Bampton Classical Players, Barts Chamber Choir, Bury Court Opera, New London Singers, Rodolfus Choir and Spiritato. He has acted as a conductor and Baroque coach for some fifteen projects with the Southbank Sinfonia, in which modern string players learn to perform earlier music with Baroque bows, and coaches students as a visiting teacher at the Royal Academy of Music, Royal College of Music and Royal Northern College of Music. Summer 2016 has seen Julian return to the JAM on the Marsh Festival to direct Sounds Baroque, return to the Anghiari Festival to conduct Southbank Sinfonia, give solo recitals at Hatchlands and the Ryedale Festival, and release the first volume of Mozart's keyboard duets with Emma Abbate for Resonus Classics.
As a player, Julian has appeared with many leading soloists at venues such as the Wigmore Hall, London, Lincoln Center, New York, and Sydney Opera House, as well as at the BBC Proms and Edinburgh International Festival. In addition to performing in productions at The Royal Opera House, Covent Garden and Welsh National Opera, Julian has appeared as a soloist and continuo player in repertoire ranging from Monteverdi to Dove with many leading groups including the Academy of Ancient Music, Britten Sinfonia, Classical Opera, English Concert, Gabrieli Consort & Players, Orchestra of the Age of Enlightenment, Orchestra of The Sixteen, Royal Northern Sinfonia and Scottish Chamber Orchestra. He is also an advocate for the clavichord, and is the first musician to have given clavichord recitals for international festivals such as St Albans, Buxton, Canterbury, Oundle, Ryedale and Two Moors, in repertoire including J. S. Bach’s two books of Das wohltemperierte Klavier. His discography includes solo and chamber recordings for Avie, Coro, Chandos, Opus Arte and Resonus on a wide range of instruments, including the Queen’s harpsichord at Kew Palace. He has made world première recordings directing Daniel Purcell’s opera-oratorio The Judgment of Paris, playing harpsichord suites by James Nares and John Christopher Smith, and Stephen Dodgson’s clavichord suites.
Julian read music at King’s College, Cambridge, and completed his formal studies at the Schola Cantorum, Basle and the Royal Academy of Music, London. Singing is central to Julian’s approach to music; the prestigious Baylis programme at English National Opera and tours singing in the Monteverdi Choir were formative experiences. His mentors have included Noelle Barker, David Parry and Trevor Pinnock. He is a Fellow of the Royal College of Organists, and has been elected an Associate of the Royal Academy of Music in recognition of his contribution thus far to the music profession.
Emma Abbate
The Neapolitan pianist Emma Abbate enjoys a demanding career as a piano accompanist and chamber musician, working with some of the finest singers and instrumentalists of her generation. She has performed in duo recitals for international festivals and concert societies in Salzburg, Lisbon, Naples, Ischia, Koscierzyna and Sorrento, and at many prestigious UK venues such as the Wigmore Hall, Southbank Centre, Royal Opera House, St John’s Smith Square, St George’s, Bristol and at the Aldeburgh Festival, in addition to broadcasts on BBC Radio 3. She also cultivates an active interest in historical keyboards, and has performed and recorded on a range of original instruments at Finchcocks and Hatchlands.
Described as 'an amazingly talented pianist' by the leading Italian magazine Musica, Emma has just released the first of two volumes of Mozart's complete piano duets on original fortepianos with Julian Perkins for Resonus Classics. This album was recorded on two original instruments forming part of the Richard Burnett Heritage Collection of Early Keyboard Instruments, and represents the final recording made at Finchcocks Musical Museum.
A keen advocate of contemporary music, Emma has recently recorded the world-première disc of complete works for cello and piano by Stephen Dodgson with Evva Mizerska. This will be published by Toccata Classics on 1st October.
She is also releasing a series of recordings devoted to 20th century Italian vocal chamber music, the latest of which is the world-première disc of Shakespeare Sonnets by Mario Castelnuovo-Tedesco with the baritone Ashley Riches for Resonus Classics. Her previous disc was L’Infinito: a musical journey through 20th century Italian songs with the mezzo-soprano Kamelia Kader, including works by Respighi, Casella, Alfano and Malipiero.
Emma's discography also includes the world-première recording of works for cello and piano by the late-Romantic English composer Algernon Ashton with Evva Mizerska for Toccata Classics. The disc has been highly praised by critics and rated among the ‘Best Finds of 2012’ by Classical Lost and Found. Their previous CD – the world-première recording of complete works for cello and piano by the contemporary Polish composer Krzysztof Meyer – was placed by William Zagorski of the American magazine Fanfare in his “Top 5” of all the CDs published worldwide in 2009.
Future plans include the release of Stephen Dodgson's piano quintets with the Tippett Quartet for Toccata Classics, and the world-première recording of songs by Ildebrando Pizzetti with the mezzo-soprano Hanna Hipp for Resonus Classics.
Based in London, Emma is a professor at the Guildhall School of Music & Drama. Following her graduation from the S. Pietro a Majella Conservatoire in Naples and an Advanced Diploma from the S. Cecilia Conservatoire in Rome, Emma studied in London with Yonty Solomon. She completed her studies with Geoffrey Pratley as a scholar at the Royal Academy of Music, from where she graduated with distinction. She was also awarded an Italian Literature and Culture degree cum laude from the Federico II University in Naples.
" class="ng-binding ng-scope">Julian Perkins & Emma Abbate