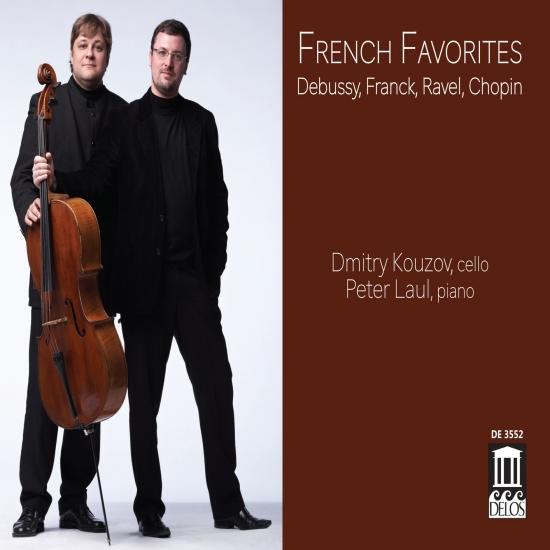 Three major masterpieces—sonatas for cello and piano by renowned French composers—make up this passionate, turbulent, tender, exuberant, and optimistic album.
Debussy’s forward-looking sonata is one of the best examples of the master’s late style. The transcription of Franck’s violin sonata for cello will make you wonder if the piece wasn’t originally planned for cello and piano (there is some evidence that it was). And Chopin’s sonata represents a rare foray into chamber music by everyone’s favorite composer of piano music. For good measure, Ravel’s short Cuban dance piece is included.
Cellist Dmitry Kouzov and pianist Peter Laul deliver breathtaking interpretations of these towering masterpieces.
Dmitry Kouzov, cello
Peter Laul, piano 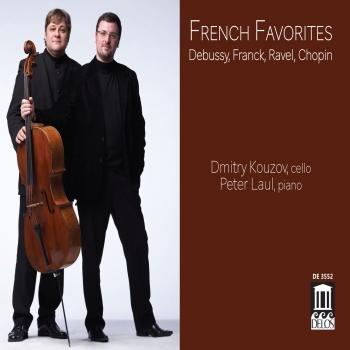 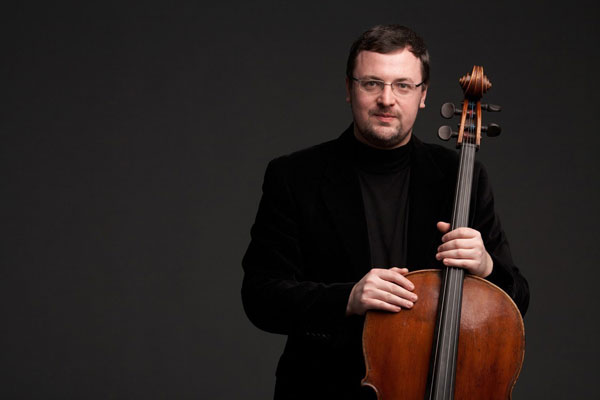 Dmitry Kouzov
A versatile performer, cellist Dmitry Kouzov has performed on five continents with orchestras, in solo and duo recitals, and in chamber music performances. He has appeared with such orchestras as the St. Petersburg Symphony (Russia), as well as National Symphony of Ukraine, and the South Bohemian Chamber Philharmonic (Czech Republic), and the Symphony Orchestra “Classica” (Russia), to name a few. He has awarded First Prize at the International Beethoven Competition in the Czech Republic and he is a two-time laureate of the International Festival-Competition “Virtuosi of the Year 2000” in Russia and is winner of the New York Cello Society Rising Star Award. His credits include numerous performances at many prominent concert venues throughout his native Russia, including both St. Petersburg Philharmonic Halls, the conservatoire halls of Moscow and St. Petersburg, respectively, and the Mariinsky Theater. Mr. Kouzov made his New York orchestral debut at Alice Tully Hall in 2005, under the baton of Maestro Raymond Leppard. Since that time, he has also made recital appearances in New York at 92nd Street Y and Bargemusic.
Highlights of Mr. Kouzov recent seasons include his debuts with the the Symphony Orchestra of St. Petersburg Philharmonic, the St. Petersburg State Symphony Orchestra, Johannesburg Philharmonic, solo appearances with the chamber orchestra “Soloists of St. Petersburg Philharmonic Society”, duo recitals in Moscow and St. Petersburg with all Brahms and Beethoven Sonatas with the prominent Russian pianist Peter Laul, and chamber music appearances at the Ravinia and Caramoor Festivals Rising Stars Series. Most recently, Mr. Kouzov made his recording debut on Naxos with three C.P.E. Bach Gamba Sonatas and a recital CD “Two Hundred Years of Cello Masterpieces” on Marquis Classics.
Mr. Kouzov has appeared in command performances before Mikhail Gorbachev and Prince Andrew, Duke of York. In 2005 and 2006, he was a guest artist at the Verbier Festival, International Bach Festival (Switzerland) and Schleswig-Holstein Music Festival (Germany). Additionally, he has performed at the “May of Janacek” International Festival (Czech Republic), and at the “Art-November” International Festival (Russia), and the “Kiev Summer Music Nights” International Festival, amongst others.
A consummate chamber musician, Mr. Kouzov has collaborated with Joshua Bell, Yuri Bashmet, Krzysztof Penderecki, Donald Weilerstein, Ilya Gringolts, and Pacifica Quartet among others. Mr. Kouzov is a founding and active member of the Manhattan Piano Trio, with whom he has toured extensively throughout United States and captured First Prizes at the Plowman and Yellow Springs National Chamber Music Competitions.
In addition to his concert activities, Mr. Kouzov is a devoted teacher. Currently Mr. Kouzov is an Assistant Professor of Cello at the University of Illinois. Prior to this appointment he was on faculty at the Juilliard School and Oberlin Conservatory. Mr. Kouzov holds Bachelors & Masters of Music degrees from the Sibelius Academy, Helsinki, and Artist Diploma from the Juilliard School in New York. His principal teachers have included Professors Mark Reizenshtock, Victoria Yagling, Joel Krosnick, and Darrett Adkins.