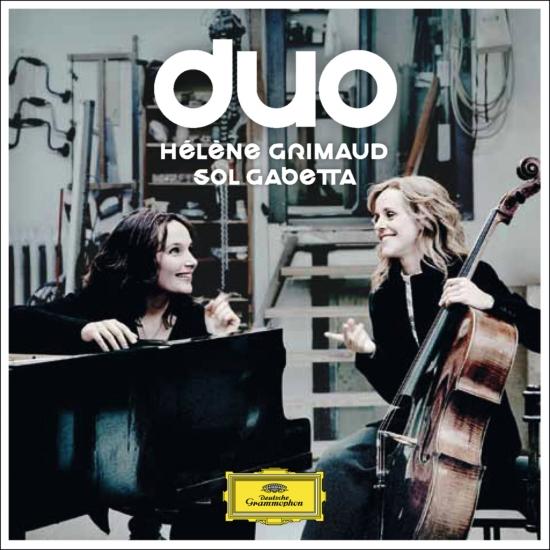 Two of today's most passionate and inspirational artists join forces in the recital programme that brought audiences to their feet at the Menuhin Festival in Gstaad in Summer 2011. The chemistry between Hélène Grimaud and Sol Gabetta left critics and audiences nothing short of euphoric and this first duo recording captures the revelatory magic of their collaboration
The album reprises the same programme the duo performed in Gstaad:
Robert Schumann’s Fantasiestücke, Claude Debussy’s Sonata for Cello and Piano in D minor, Johannes Brahms Sonata for Cello and Piano No.1 in E minor and Dmitri Shostakovich’s Sonata for Cello and Piano.
Hélène’s recordings have been best-sellers on the Yellow Label with more than 800,000 units sold altogether to date. Sol is also a best-selling, chart-storming artist, who is regarded as one of the great cellists of our day.
“Gabetta plays the Schumann Drei Fantasiestücke and Brahms Sonata No 1 mellifluously, without revealing much beneath the surface. Grimaud is ever-attentive, but there’s little sense of two personalities striking sparks.” (Financial Times)
„. . . the duo's playful work on Schumann's 'Drei Fantasiestücke' bears out both Grimaud's assessment and the pair's shared sensibilities. Brahms' Sonata for Piano and Cello No.1 in E minor, though possessed of more gravitas, is more lightly dealt with than I've heard before, while they bring a questing spirit to Debussy's Sonata for Cello and Piano in D minor, Gabetta's robust pizzicato work in the second movement and Grimaud's animated runs in the closing section both evoking the early jazz influence of the late Romantics.“ (Andy Gill, Independent, London)
Helene Grimaud, piano
Sol Gabetta, cello 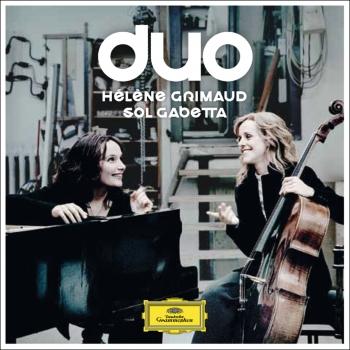 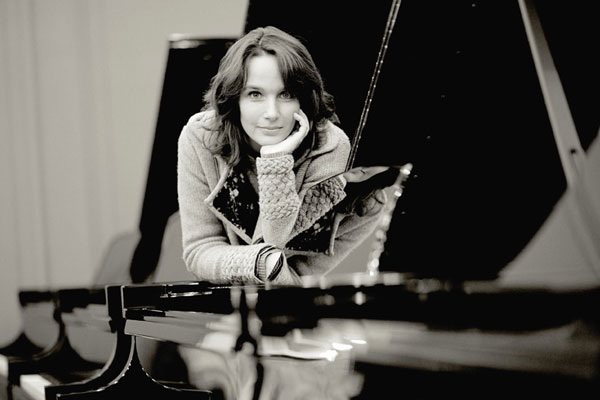 Hélène Grimaud
She could be called a Renaissance woman for our times. Hélène Grimaud is not just a deeply passionate and committed musical artist whose pianistic accomplishments play a central role in her life. She is a woman with multiple talents that extend far beyond the instrument she plays with such poetic expression and peerless technical control. The French artist has established herself as a committed wildlife conservationist, a compassionate human rights activist and as a writer.
Grimaud was born in 1969 in Aix-en-Provence where she began her piano studies at the conservatory with Jacqueline Courtin and subsequently under Pierre Barbizet in Marseille. She was accepted into the Paris Conservatoire at just 13 and won first prize in piano performance a mere three years later. She continued to study with György Sándor and Leon Fleisher until, in 1987, she gave her well-received debut recital in Tokyo. The same year the renowned conductor Daniel Barenboim invited her to perform with the Orchestre de Paris.
This marked the launch of Grimaud’s musical career; one highlighted by concerts with most of the world’s major orchestras and many celebrated conductors. Her recordings have been critically acclaimed and awarded numerous accolades, among them the Cannes Classical Recording of the Year, Choc du Monde de la musique, Diapason d’or, Grand Prix du disque, Record Academy Prize (Tokyo), Midem Classic Award and the Echo Award.
Between her debut in 1995 with the Berliner Philharmoniker under Claudio Abbado and her first performance with the New York Philharmonic under Kurt Masur in 1999 – just two of many acclaimed musical milestones – Grimaud made a wholly different kind of debut: in upper New York State she established the Wolf Conservation Center.
Her love for the endangered species was sparked by a chance encounter with a wolf in northern Florida which led to her determination to open an environmental education centre. “To be involved in direct conservation and being able to put animals back where they belong,” she says, “there’s just nothing more exciting.”
But Grimaud’s engagement doesn’t end there: she is also a member of the organisation Musicians for Human Rights, a worldwide network of musicians and people working in the field of music to promote a culture of human rights and social change.
For most people, establishing and running an environmental organisation or having a flourishing career as a musician would be accomplishment enough. Yet, remarkably, Hélène Grimaud has also found time to pursue writing. Her first book, Variations Sauvages, was published in French in 2003 and subsequently translated into English, Japanese, Dutch and German. Her second book, Leçons particulières, which is part novel and part autobiography, followed in 2005.
Despite her divided dedication to these multiple passions, it is through Grimaud’s thoughtful and tenderly expressive music-making that she most deeply touches the emotions of audiences. Fortunately, they have been able to enjoy her concerts due to her extensive touring programme with major orchestras around the world. In 2013, she performs in the UK, France, Germany, Italy, Luxembourg, Switzerland, Russia, the USA, Brazil, China and Japan. Amongst others, she will play with the Czech Philharmonic, Orquestra Sinfônica do Estado de São Paulo, the Philharmonia, St Petersburg Philharmonic, Los Angeles Philharmonic, the Russian National Orchestra, the Cleveland Orchestra, the Philadelphia Orchestra and the City of Birmingham Symphony Orchestra.
Brahms features prominently in Grimaud’s programming repertoire throughout 2013. In the autumn Deutsche Grammophon will release her album of the two Brahms piano concertos; the first concerto with Andris Nelsons conducting the Bavarian Radio Symphony Orchestra and the second recorded with the Vienna Philharmonic. When she took the Brahms on tour to Southeast Asia this year, The Straits Times of Singapore said: “Her playing was distinguished by superb timing and consistency of touch, and seamless interplay between piano and orchestra.”
Grimaud is also an ardent and committed chamber musician who performs frequently at the most prestigious festivals and cultural events with a wide range of musical collaborators that has included Sol Gabetta, Thomas Quasthoff, Rolando Villazón, Jan Vogler, Truls Mørk, Clemens Hagen and the Capuçon brothers.
An exclusive Deutsche Grammophon artist since 2002, her most recent release was Duo, a collaboration with cellist Sol Gabetta, released in October 2012. Last autumn the pair gave a series of concerts in Germany and France, performing the cello sonatas by Schumann, Brahms, Shostakovich and Debussy which are featured on the disc. The album’s repertoire originated as an inspired recreation of a concert they gave at the 2011 Gstaad Festival and which the Berner Zeitung described at the time as “breathtaking” while BBC Music Magazine commented that “. . . in the grand first movement [of Brahms’ Cello Sonata No. 1] Hélène Grimaud produces a context of almost orchestral depth and spaciousness into which Gabetta projects her eloquently refined lines.”
Previous releases include her Mozart Piano Concertos No. 19 and No. 23 with the Kammerorchester des Bayerischen Rundfunks. That disc, released in 2011, also featured a collaboration with singer Mojca Erdmann on a recording of Mozart’s Ch’io mi scordi di te? … Non temer, amato bene. Grimaud’s 2010 release, the solo recital album Resonances, featured music by Mozart, Berg, Liszt and Bartók. Other DG recordings by Grimaud include Bach’s solo and concerto works in which she directed the Deutsche Kammerphilharmonie Bremen from the piano bench, and a Beethoven disc with Staatskapelle Dresden and Vladimir Jurowski, Reflection and Credo (both of which feature a number of works linked thematically), a Chopin and Rachmaninov Sonatas disc, and a DVD release of Rachmaninov’s Second Piano Concerto with the Lucerne Festival Orchestra under the direction of Claudio Abbado.
Hélène Grimaud is undoubtedly a multi-faceted artist. Her deep dedication to her musical career, both in performances and recordings, is reflected and reciprocally amplified by the scope and depth of her environmental and literary pursuits.