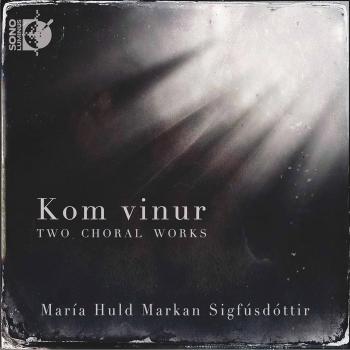 María Huld Markan Sigfúsdóttir
(b. 1980) is a composer and a violinist.
She graduated as a violinist from the Reykjavik College of Music in 2000 and with a Bachelor’s degree in composition from the Iceland Academy of the Arts in 2007.
Maria is a member of the band amiina from 1999. amiina has released and recorded several albums and performed their music around the world as well as collaborated with various artists.
With amiina, Maria was a touring member and collaborator of Sigur Rós from 2000-2008.
Maria has composed music for orchestras, various sized ensembles, choir, choreography and films.
Maria's compositions have been recorded and released internationally. Clockworking, Sleeping Pendulum, Aequora, Spirals, Loom and Oceans all have been released on the US label Sono Luminus.
In 2012 her piece, Sleeping Pendulum, for baroque violin and electronics received a price at the IRC (International Rostrum of Composers).
Her piece, Loom, was on the top 25 list of best classical music tracks of 2018 in The New York Times. The album Concurrence, which includes Maria's piece Oceans, performed by the Iceland Symphony Orchestra was on the top 25 list of best classical music albums of 2019 in The New York Times.
As well as composing her own music, Maria has recorded and collaborated with a range of artists and bands including Los Angeles Philharmonic, Fort Worth Symphony Orchestra, Miguel Harth-Bedoya, Joan Jonas, Spiritualized, Nordic Affect, London Sinfonietta, Francesco Scavetta, Brice Dessner, Mike Ott, Yann Tiersen and Ragnar Kjartansson. Her compositions have been performed in Iceland, USA, Australia and Europe.
Recent work includes music for the performance piece Moving off Land by Joan Jonas, Aequora and Oceans, commissioned by the Iceland Symphony Orchestra, Clockworking for Orchestra, commissioned by Fort Worth Symphony Orchestra as well as various works for smaller ensembles and choirs.